In this extract, the Ghost of Christmas Present shows Scrooge the Cratchit family’s Christmas celebrations.

Oh, a wonderful pudding! Bob Cratchit said, and calmly too, that he regarded it as the greatest success achieved by Mrs. Cratchit since their marriage. Mrs. Cratchit said that now the weight was off her mind, she would confess she had had her doubts about the quantity of flour. Everybody had something to say about it, but nobody said or thought it was at all a small pudding for a large family. It would have been flat heresy to do so. Any Cratchit would have blushed to hint at such a thing.

At last the dinner was all done, the cloth was cleared, the hearth swept, and the fire made up. The compound in the jug being tasted, and considered perfect, apples and oranges were put upon the table, and a shovel-full of chestnuts on the fire. Then all the Cratchit family drew round the hearth, in what Bob Cratchit called a circle, meaning half a one; and at Bob Cratchit’s elbow stood the family display of glass. Two tumblers, and a custard-cup without a handle.

These held the hot stuff from the jug, however, as well as golden goblets would have done; and Bob served it out with beaming looks, while the chestnuts on the fire sputtered and cracked noisily. Then Bob proposed:

“A Merry Christmas to us all, my dears. God bless us!”

Which all the family re-echoed.

“God bless us every one!” said Tiny Tim, the last of all.
​
He sat very close to his father’s side upon his little stool. Bob held his withered little hand in his, as if he loved the child, and wished to keep him by his side, and dreaded that he might be taken from him.

Dickens uses the plight and poverty of the Cratchit family to attempt to shed light on the lives of the poor, in contrast to the lives of the rich aristocrats in Victorian society, like Scrooge.

The first exclamatory sentence of the extract stated by Bob Cratchit that it was a “wonderful pudding!” immediately implies that they are grateful and easily excited.  Despite it being a “small pudding” for a “large family”, they all regarded it as a “success”.  Perhaps this is because they usually did not have the luxury of a pudding, so any pudding at all was seen as a blessing.  The adverb “calmly” also creates an aura of excitement in the atmosphere, as it implies that there is an apprehensive glee about the family.

Again, in the extract, Dickens has included the fact that they only possessed “Two tumblers, and a custard-cup” for which the whole family shared.  He then juxtaposes this with the idea of “golden goblets”, which only serve to emphasise the Cratchits’ lack of wealth and widens the gap between society’s rich and poor, that during the Victorian era, was wide and obvious.

We see the Cratchits as a unit – a real family who is bonded by shared affection and strengthened with love, as opposed to money, status and wealth.  The personal pronouns “my”, “us” and “all” paired with the terms of endearment, such as “dears”, indicates to the reader that the Cratchit family are a united force that stands up and rejoices in happiness and joy, despite facing the rough shame of poverty that flooded Victorian London.  The fact that even Tiny Tim, who “bore a little crutch” and was held up by an “iron frame”, stated, “God bless us every one!”, only proves to the reader that the Cratchits still remain in high spirits, regardless of their unfortunate circumstances.

The use of the verbs “wished” and “dreaded” sum up the attitude of the poor and in particular the Crachits.  They were hopeful and positive, as if they “wished” and expected their lives to improve, but also “dreaded the future, as they recognised that if the rich were unwilling to help, they would suffer and even have their son “taken” by death.  Scrooge, a wealthy, well-off, privileged businessman, refused to donate to the “portly” charity collectors as he, like many others in the context of the novella, assumed and believed that the poor were “idle”, as if they were poor from their own laziness and lack of ambition.  Many in Victorian society thought that they were a nuisance.  In fact, Scrooge even went so far as to say that if they were to “die”, they’d better do it quickly and “decrease the surplus population”.  This attitude was the one that Dickens was looking to expose and combat with the publication of ‘A Christmas Carol’ in the Industrial Revolution.  It is speculated that it was written in staves, like a Christian carol, and published as a book cheaply, rather than advertised as a play, because in this form it would reach more people.  Dickens probably assumed that a short, witty story would last longer as a Christmas tale, than a play would – and he was correct.

Throughout the novella, Dickens portrays Scrooge and Bob as opposites who directly contrast with each other.  For instance, as Bob retires to his “dismal little cell” where the “single coal” that his cruel employer allows him burns, he is still grateful and thankful for allowing him one day off and in high spirits as he returns home.  This “gratitude” over such as simple, almost necessary, act of decency from Scrooge shows his “meagre” conditions.  Bob is able to rejoice in the spirit of Christmas far more openly than Scrooge.

This directly contrasts with Scrooge’s flippant, dismissive attitude towards the struggles of the poor, as when approached by some charity collectors if he would consider placing a small donation, he replies with the predictably cold, callous questions, “are there no prisons?” and “union workhouses?”  These rhetorical questions could either signify his ignorance to the issue at hand, or simply his refusal to engage in helping.  Either way, Scrooge demonstrates a distinct lack of empathy towards the poor and instead returns to his “comfortable” “set of rooms” where he goes about his daily routine – stopping not even for a second to think of those who were less fortunate than he.

Dickens also mentions the Cratchit family in some of the visions or ghostly encounters that Scrooge experiences.  For example, when the Ghost of Christmas Yet To Come – an ominous figure “shrouded in a deep black garment” that easily “moved like mist”, showed Scrooge the Cratchit family mourning the loss of Tiny Tim, Scrooge cannot help but to hang his head in penance and guilt.  This suggests that he feels great shame towards his actions.  Similarly, when shown “Ignorance and Want” by the “jovial” giant Ghost of Christmas Present, Scrooge was taken aback when his own miserly phrase “are there no prisons” was used against him to educate him on his wrong doings.  Scrooge feels a “pang” of guilt across his heart.  This indicates that from seeing the effects of the plight of the poor, causes him such grief that he feels it emotionally and physically.  As if the pain is so strong that it can cross over from the emotional to the physical, like the message he learns comes over from the supernatural to the real world.

In effect, Dickens contrasts the lives of the Cratchits to the life Scrooge lives and highlights how despite their obvious misfortunes, they are the ones who carry the Christmas spirit.
Exemplar AQA Unseen Poetry Essays 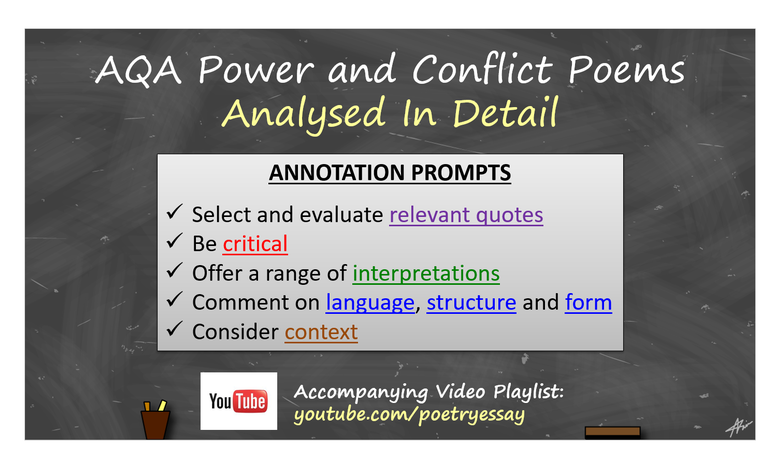